It’s heartbreaking to see the devastation and utter collapse in Kathmandu and Nepal— that region of breathtaking views, plunging valleys, terraced rice paddies, crimson-clad pilgrims and warm-hearted people, who bring strangers and travelers home and into their hearts as my dad and I experienced last Fall. 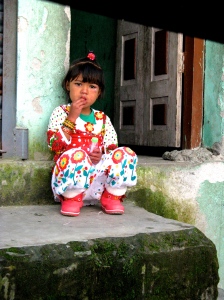 In the months since my return from Nepal, it has seemed a distant memory, a friend I keep touch with and long to see again. 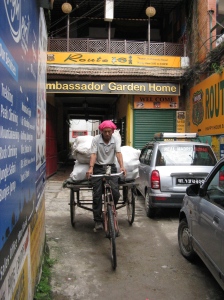 People like Prakash, proprietor of the Ambassador Garden Home in central Kathmandu, who given this week’s earthquake is opening his doors to feed and house displaced people. Likewise, he took in my father and I last Fall when our plans suddenly changed, inviting us as his personal guests at dinner where we shared a table with amazing people like Rosa and Ian who back an orphanage, where we met children who were thriving after having been taken in from the streets by a Nepali trekking guide. 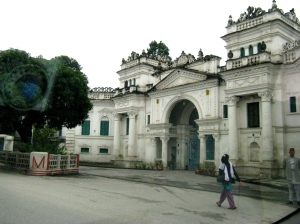 As my heart skips at seeing images of this ancient and fascinating city crushed and crumbling around its people, who work so hard for so little, it’s heartening to know that our friends are doing well, at least for now. But I want to tell you how we met these amazing people and how wonderful and gracious the Nepali people are. And how much they will need a world that cares right now.

Last Fall my father and met a lovely couple at the hotel where we stayed in Kathmandu’s Thamel district. In a round about way (another story) they had become backers of an orphanage in the area. Before setting off to see Mount Everest, we were invited to visit the orphanage.

But first my dad and I set off to see Mount Everest by flying into Lhasa and taking a jeep back to Kathmandu via the Araniko Highway, which is one of the worlds’ most treacherous (top 10 most….) roads, according to National Geographic. You know the type… you likely get those nice internet slide shows about this… the kind that make you want to wet your pants just looking at the photos? 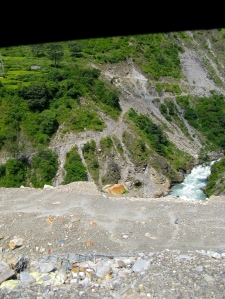 Well, we got to ride and survive just that kind of slippery gorge-side thousand foot drop off, kiss-yer-ass goodbye kind of road. But not on purpose.

At the last minute before departure from Kathmandu, our guide told us we’d have to negotiate our own way around a landslide in the Sunkoshi Gorge after leaving Tibet/China and reentering Nepal at Nayalam. This meant some quick thinking about how possible this was. You see my dad is losing his ability to walk and is limited to short stretches between jeep and accommodations, otherwise, he needed the travel wheelchair chair, I’d spent days researching and trying out before we set out.

Here is a snippet of that conversation as we learned about the landslide:

“The landslide’s been all over the news. After Everest you cross back into Nepal, you’ll come to the Sunkoshi Gorge. The landslide filled the gorge, backing up the river. Hundreds of people buried alive.”

Me: “How horrible. I’m so sorry. How do you propose we’ll get my dad and his wheelchair through?” I asked, angry he hadn’t told us earlier.

Guide: “The military’s working on the road. You might have to walk two kilometers.”

The idea of my father shuffling along the slippery scree of a Nepalese mudslide seemed too much, even for me, who’d trekked her share of wilderness.

I wondered if we could emotionally bear creeping along a gorge slope as recovery crews sifted through rubble in search of the dead? My heart ached for the suffering of the Nepali people. And, I had a decision to work through with my dad that night at our Kathmandu hotel. To do this or not. Given the years long planning and his declining health, this window of opportunity was it.

After a few moments of bowing our heads together and brushing aside images of body bags and river-side cremations (those of others and our own), and my mother’s admonitions about my bringing my dad home in a coffee can, my dad and I decided we had to do it. We had to see Everest. Even if meant negotiating our own way over or around a landslide of uncertain possibility.

What we didn’t know was that the gash of a goat path cut into the gorge-side opposite of the landslide that bypassed those buried villages, constituted a new level of danger that reset the National Geographic standards. In short, I thought we would not make it back in a timely fashion—if at all on that route. So much so that my last text to my husband before we left for Tibet that night said:

“If you don’t hear from us by your birthday, we’re trapped behind a landslide at Nepal border. Options for getting through change daily.”

The guide had told us that given that dirt bikes were negotiating a hand-shoveled trail over the landslide, that perhaps jeeps would be getting through by the time our week-long jeep trek had gotten us from Lhasa to Tibet’s base camp. But he was not certain. He said that currently people were hiring sherpas to carry their luggage across and some trekkers had radioed for helicopters and where they could group up five or more the flight back to Kathmandu cost them about $250 a piece.

Knowing the situation was fluid, knowing my father could not walk, we still decided to push forward. I would later learn, given the rate of natural disasters and the lack of funds for maintaining roads that Nepali’s negotiate these obstacles as a matter of everyday life. But this week’s earthquake is not everyday life, even for a people as resilient and inventive as the Nepali. 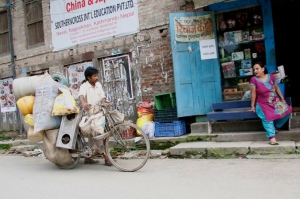 And, nothing along the magnitude of an earthquake as large as this week’s, has happened since 1934. Reports from the time indicate that close to 12,000 people in that region of Asia died due to that earthquake. Today’s news that 4,000 people have died from this week’s earthquake, makes me wonder about the secondary deaths to come, as already challenged water supplies become even more compromised. According to the New York Times and CNN, hospitals are treating and housing patients in the muddy, dusty streets in fear that aftershocks will collapse hospital buildings.

Also, I cannot imagine the turmoil this earthquake has wreaked on a region already challenged by potable water issues, long distances, villages clinging to gorge sides and mountain ledges reachable only by small highly unstable dirt roads, and sketchy supply chains already challenged before this. 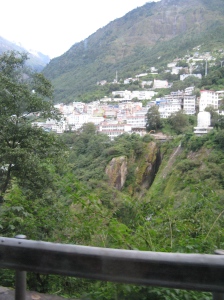 More on our return from the Araniko Highway’s Nyanang: the Road to Hell, our return to Kathmandu, and how our friends are faring in the earthquake soon.

16 thoughts on “My Heart Breaks for Nepal & Friends in Kathmandu”