Other than a popular murder mystery series written by Robert B. Parker and part of great website by Windy Lynn Harris backstory can be described largely as: “a story that tells what led up to the main story or plot (as of a film).”         (http://www.merriam-webster.com/dictionary/backstory)

Last night I caught a 2011 episode of Castle called “Setup.” Embedded in this story, of international versus homegrown terrorist intrigue, is Homeland Security Agent Mark Fallon, a mercurial, stringent character with aggressive tendencies. Agent Fallon’s character serves as a foil to Kate Beckett’s normally tough-edge and Richard Castle’s comic relief. Agent Fallon’s gut wrenching backstory, revealed about two-thirds of the way through the show diffuses some of his inexplicable aggressiveness and adds a layers of intrigue and complexity to what appears to be a straight forward story line.

Here is the setup to Setup:

Recently US-nationalized Syrian cab driver Amir Alhabi, who runs his own     company… is shot in his cab after a 45 tour… . Homeland Security Agent Mark Fallon takes charge after… cobalt radiation [is discovered and]…feared to stem from a nuclear weapon.            (http://www.imdb.com/title/tt1628166/plotsummary?ref_=tt_ov_pl)

Agent Fallon, in interrogating Alhabi’s innocent widow oversteps the line by threatening to take her baby away. Viewers know the line has been crossed by expressions on Beckett and Castle’s face. But their stance toward Fallon softens when they learn through fellow officers his backstory. Fallon is driven to distraction to protect New York City from terrorism because as Detective Kevin Ryan explains, “On 9/11 his wife rode the second tower down. They were on the phone till the end.”

The backstory not only explains his behavior, it allows viewers to excuse it, somewhat. Backstory, as a literary technique, in that sense serves to add needed moderation and complexity to a seemingly straightforward story.

This brings me to a story I’ve held close to my chest for a while. In order to protect those mentioned, I shall remain a bit circumspect regarding names and details, but you’ll get the idea… 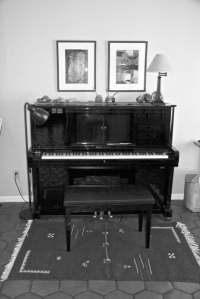 At a recent international exchange student event, I watched a young man play the piano. I wouldn’t have thought much of it: a young man gets up in front of a crowd of about a hundred other students and families in his Asian nation’s traditional garb and plays an advanced beginner piano piece.  Except that upon entering the event that night, I overheard his American host parent mention how the student was  disappointed that she did not have a piano he could practice that weekend.

That caught my attention since, what high schooler do I know—in this country—who’d want to practice piano—let alone over a weekend? It’s usually (American) parents begging—rather flogging—their high schoolers to practice–anytime.

The following morning, I had a chance to walk with this student who shyly lingered behind the rest on a walk through the city. And, on this walk his backstory emerged.

“I enjoyed your concert last night,” I said.

“Did you play before you came to the US?”

“What do your parents do in your country?”

“My father grows rice and oxen.  My mother gives massages,” he said.

“Will you be able to play piano when you go home?”

“No. Not many people in my country can afford one. My family cannot,” he answered.

Immediately upon learning that backstory my mind scrolled back to the night before: the nervous young man on stage, playing a song to images of his country projected on a screen large enough for a movie theater for over a hundred people representing fifteen countries. It didn’t matter to him that most kids his age could play songs five times as difficult. Last night was his Carnegie Hall—a once in a lifetime moment. Later I learned that a local musician had donated a year’s worth of lessons to this young man’s lifelong desire to learn the piano.

The backstory in this case made the story. It framed the hesitant young man’s debut as something extraordinary, worthy of special attention.  Learning of this backstory, we are on pins and needles for him as he plays the piano, wondering if such a moment will again be possible when he returns to tend oxen and rice paddies. Can he have both ways of life, represented by the rice paddy and the piano? Or will one recede into memory, sacrificed for the other? Or will circumstance decide for him?

Television decides for us—the importance of the front and the backstory. But real life is slow to give up its backstories. Cherish them when the veils fall away revealing something sacred.

How often have you changed your opinion of someone once you understood his or her backstory? How did knowing the backstory make a difference in your view of that person and their situation?