“Does Madonna walk around the house in cone bras and come-bleep-me bustiers?”  -Steven Pressfield 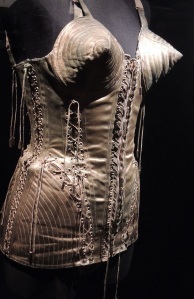 Not only does Pressfield have the art of the hook down, he’s got a point in The War of Art.  (Note, “bleep” is in editorial insertion….) This line is from the short, short chapter titled “A Professional Distances herself from Her Instrument.”

As I was looking for a topic to write about, Pressfield’s chapters on professionalism caught my eye. Recently I’d been opting to leave my computer home during recent excursions in favor of carrying a small notebook. This summer in Europe, I managed a few pages of notes in the simple 5×8 inch style notebooks I’ve carried since I was old enough to decide I wanted to be a writer. Why 5×8?  Slightly bigger than a paperback and smaller than most text books, it doesn’t get lost and is easy to take along.

Likewise, how many times have I lugged a computer along on a family trip and to have it be a boat anchor? Dead weight. We were having too much fun reeling in the memories for me to write about them on the fly.

But what does this have to do with Madonna’s bra? (Besides the boat anchor analogy?) The idea that while you’re traveling and chugging through experience, you shouldn’t be writing it.  The computer comes later. Take some notes. Spill that wine, smear the ashes on the page.  Let the organic experience happen before you document it. According to Pressfield: “The pro stands at one remove from he instrument– meaning her body, her voice, her talent…”

He also goes on after the lovely bustier image to say Madonna’s “…too busy planning D-Day. Madonna does not identify with “Madonna.”  Madonna employs ‘Madonna.'”

For me as a writer, this means the computer usually stays home. It’s an instrument of the writer. It does not a writer make. So, when I travel–unless it’s specifically for writing: a conference, a writing get-away, working on an article– I leave the , the computer at home.  If I feel like I can’t document something quick enough in my notebook, I open up my voice memo app on my ipad and take some voice memos. With hours of voice memo space, I can quickly take voice memos to use later.  Likewise, I opt to carry enough SD cards for the camera in hopes that I won’t need to stop and buy more. The idea is to avoid carrying the  computer.

On the whole, while traveling with family, I find it much easier to be in the moment rather than carting along a computer to document those moments.

What do you leave behind or take with you to facilitate writing or your profession? How do you distance yourself from your profession in way that allow you to be better at it?

24 thoughts on “The Computer Stays Home!”